Chomping at the bit after an insanely long winter, a surprisingly large number of cars gathered for an impromptu mid-week drive up to Vernon for lunch. Nine cars started off from the Tim Horton's on Kane Road, and with blue skies above us we headed north on Glenmore Road to the farms, orchards and wineries of Lake Country. Along the lakeshore we suffered a single indignity of one of the region's many "traffic calming devices"; speed bumps so large that it is recommended to hire Sherpa guides to maneuver over them! Then it was on to Commonage Road past Predator Ridge Sparkling Hill before turning down Bench Row Road to Okanagan Landing. Two more cars joined us at Kin Beach Park.

We then followed Bella Vista Road to Vernon and along Alexis Park Drive where our Clueless Leader, undoubtedly dazzled by the bright sun and unfamiliar warmth, managed to blow past a critical turn at 39th. Luckily everyone regrouped and made it to Squires Four Pub. A final car met us at the pub for a total of 12 cars and 22 participants. We enjoyed a very nice repast on the patio before heading our separate ways home.

Due to Bill"s inability to follow the rules about giving Casey a two-way radio we were again "entertained" by his running commentary of the sights, and whose touching concern about people making it through the lights is unforgettable. The word is he is planning on purchasing his own set. You have been warned! 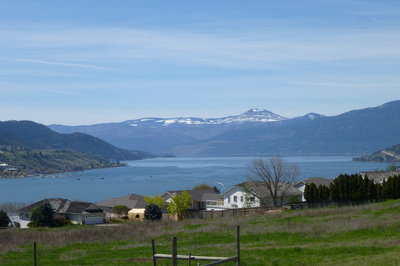 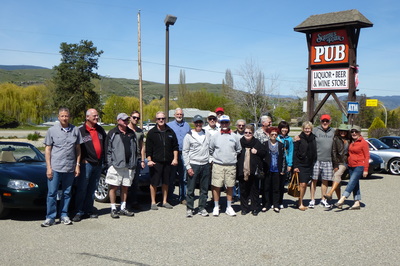 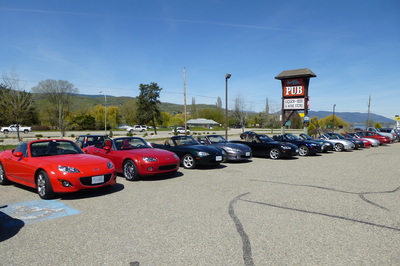